Foods to Avoid Giving Your Cat 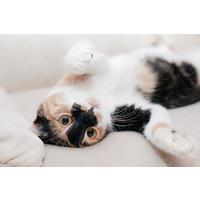 Cats are generally quite easy to feed. A good cat food will give them all the nutrition they need and most cats will happily scoff these down at dinner time. Sometimes, though, they will also go in search of other food, and this can be troublesome. A lot of foods that a cat may come into contact with are unhealthy for them, and could even cause them to die. You might be surprised at some of the foods that cats are unable to eat safely, so it is important to find out just in case.

13 Foods That You Should Avoid Giving Your Cat

Cats just love tuna. It is fish after all. No matter how much they may love it, however, it is not a suitable food for a cat. Tuna does not contain the nutrition that cats need. This means that if you try to feed them on a diet of tuna, they will become malnourished and this could lead to a range of complications. Too much tuna could also lead to your pet picking up mercury poisoning. While a little tuna from time to time as a treat is OK, it should only make up a small part of their diet.

Milk and Other Dairy Products

Cat owners will often give their pets a saucer of milk as a treat, but they could be doing them more harm than good. Milk is heavy in lactose, and the enzyme lactase is required to break it down. Cats don’t produce this enzyme, meaning that they are unable to process lactose. This can lead to upset stomachs, and in some cases, these can be severe.

Bones are another popular treat for cats that should be avoided. Bones can snap and splinter, revealing sharp, jagged edges that can cause physical damage to their mouths and intestinal tract. Small shards of bone can also be ingested and potentially lead to complications in the stomach. Chicken bones in particular are a risk because of their brittle nature, although you should try and avoid giving any type of bone at all.

Giving your cat table scraps is OK in itself, provided certain foods are not included. However, the food that we eat should not be used as an overall diet for your cat. While what we eat may be just fine for us, it does not have the nutrition that cats require. For starters, cats require a lot more protein in their diet than we do. Our diets also contain a lot more starch than is suitable for cats, along with other elements that they are unable to process themselves.

Some table scraps are just fine, and can even make a good dietary supplement as they will contain various goodies that are not in their normal food. Give them too much, though, and they may not eat their normal food, meaning they don’t get the nutrition that they need. This can lead to malnutrition, regardless of how much they may eat.

Red blood cells are responsible for carrying oxygen around the body to where it is needed. Without these cells, we would simply die. Onions, garlic and chives all contain a substance known as N-propyl disulphide. For people, this is not a problem as the compound is processed with ease. For cats, however, it is quite a different story.

N-propyl disulphide breaks down red blood cells. Because cats are unable to process the compound safely, their blood cells come under attack. Too much could lead to them becoming anemic which could be fatal to them. While a little is OK, it should only be a minimal amount, although even a little might still cause them to have an upset stomach.

While it should be common sense that you don’t give alcohol to your cat, it is something worth reminding. Cats have much smaller bodies than we do and, as such, are unable to process alcohol as quickly as we do. Even a small amount could make them very ill, and it could even kill them.

Caffeine is a drug that has the effect of increasing the heart rate. In people, this makes it a good stimulator, and something that helps to give us a kick-start in the mornings. This increased heart rate can be deadly for cats, however, so they should keep well clear of caffeine. This includes not only drinks containing caffeine, but also the ingredients they are made from such as tea leaves and coffee beans.

A delicious treat to us, chocolate can be fatal to your kitty. Chocolate contains a compound named theobromine, and it is highly toxic to cats. While we can process it with ease, it causes severe problems to cats that ingest too much. Symptoms include an abnormal heart rate, seizures, tremors and even death.

Candy, gum and cakes are just a few products that contain an ingredient known as xylitol, which is commonly used as a sweetener. If ingested by cats, xylitol can cause hypoglycemia, and this can be fatal to them. The good news is that cats tend to stay clear of such products anyway, but be mindful that these products can be extremely harmful to them.

As delicious as they may be, fat trimmings can be very harmful to your kitty. Cats require a high-protein diet and have not evolved to be able to process fat in significant quantities. This means that they can quickly become obese, which in turn leads to various complications such as diabetes and pancreatitis. A little every now and then is OK, but make sure that they don’t get too much.

Raw eggs have the potential to be packed with dangerous bacteria. E. Coli and salmonella, for example, can be just as dangerous to your cat as they are to us. Take the risk and the results could be catastrophic.

Dog food tends not to have the required level of protein that cats need in their diets. This means that if they feed on dog food alone, they will not be getting the nutrition that they need. If your cat is eating the dog’s food then you should try and make sure the dog has finished eating, removing any food that is left over. While eating some dog food occasionally is unlikely to be problematic, it should not be allowed too often.

It might seem like a minefield of dangerous foods when it comes to feeding your cat. Just use common sense, though, and you should be fine. If your cat is not eating that is another issue that should be addressed. To be sure, make sure that they eat only food that is made for cats, by well reputed brand names. Give them the best cat food you can find, and they will have a long and happy life.